In September I attended a wedding for my son Dylan and his wife, Gabby, in Minnesota. Their original plan was for a wedding there in June 2020. Dylan and Gabby live in Austin, but she is from Minnesota and that is where most of her family is. The wedding was postponed due to the pandemic. In 2020 I had planned to fly in and fly out, but this year I decided to go by motorcycle, partly in order to have a little adventure of my own. Also, I was concerned about the Delta variant and breakthrough infections. I wanted to avoid airports. Was riding a motorcycle less risky? I am not sure, but I liked the idea. Would my old motorcycle, which I purchased for $600 as a project bike, be up to the long journey? Another good question, but only one way to find out.

I charted my path along roads less traveled. Most people driving up there from Austin followed I-35 North. My path north stayed well west of I-35, beginning on HWY 71 to HWY 181 and then north through Oklahoma, Kansas, Nebraska, and South Dakota. I made it to the destination city, Crosslake, Minnesota, on my third day of travel, Thursday, September 16th. The wedding was at a lodge on Big Trout Lake.

Dylan and Gabby had been closely monitoring my progress prior to my arrival. My getting there was a big relief to a lot of people. Of course, they were concerned about my wellbeing, but there was the additional fact that I had agreed to pay for what they had called the "rehearsal dinner" to be held Friday evening. This was something of a misnomer. There was no rehearsal and they told anyone who could get there that they were invited. Sally had agreed to pay for the wedding reception and that turned out to be for 62 people. Sally, Dylan, and Gabby pretty much planned everything. This was fine by me. However, a certain amount of suspense for me held in the fact that despite several requests, I had not been given an estimate for how much I might be on the hook for. Fifty guests made it to the “rehearsal” dinner. I finally got my answer on cost when the bill was presented to me afterward. To my great joy, it came in under what I expected. People had a great time. The wedding on Saturday was outside, perfect weather, the best it had been in days. It came off without a hitch, again, everyone seemed happy, even Sally and I got along! The stars were aligned. 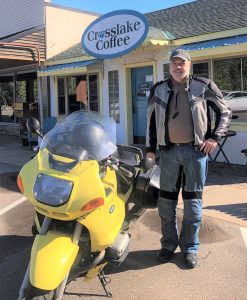 A good portion of the wedding guests stayed Sunday and hung out on the lake. The good weather continued. Dylan had rented a pontoon boat that people went out on. It was a lazy day where a lot of people were in recovery mode. Dylan slept well past noon. Some of the partiers had been up until 5:30 am. Having a day for relaxation and recovery after the wedding was a good plan.

People who stayed Sunday, all left Monday, heading in their separate directions. Storms had rolled in overnight and Monday morning, as I pondered my own departure, things were a mess. The temperature had dropped 30 degrees from the day before, gusting wind, lightning, thunder and the rain was coming down in sheets. I wanted to ride to Duluth and see Lake Superior again. I thought I had packed a set of rain gear, but it turned out I packed two rain jackets and no rain pants. Bummer! I debated whether or not to leave. At checkout time I finally decided to go for it. Winds had died down, it was raining, but it was more of a steady rain and no lightning.  So, I headed out. Along that stretch of the ride, the fall colors were spectacular. I made it to Duluth and crossed over a long bridge to Superior, Wisconsin where I found lodging. From my room, I was able to watch ships rolling by toward Duluth Harbor. My dinner was a sandwich and chips I found in a vending machine. It was enough for me. Cold and wet outside, I was happy to be there in my room with a view. I was also able to reflect on how fortunate we had been to have fine weather for all the wedding festivities the past weekend.

Tuesday morning was chilly but dry. I rode along Lake Superior over to Ashland, another harbor town, and had some hot coffee. Gordon Lightfoot lyrics played through my mind, “Superior, it’s said, never gives up her dead when the gales of November come early!” A friend texted me asking whether I had any trepidation about riding my “tweety bird yellow” BMW through Harley Country.  No, not really. My bike will do 135 mph. Ho! Faster than most Harleys. From Ashland, I traveled south and then east to Waukesha. My cousin, Leigh, had attended the wedding with her family. They invited me to come to stay with them. Her husband Jim, son Andrew and I went and visited the Harley Davidson Museum in Milwaukie. Their idea, I enjoyed it. Recommended! And throughout my stay, we had a good time together. Friday morning, I resumed my travel heading south through Illinois, where I spent a night, then down through Missouri and Arkansas. Saturday night I stayed in Hot Springs.

Sunday morning, I left traveling in the direction of home without using my GPS, just enjoying country roads navigating by a sense of direction based on the position of the sun. The hills and winding roads in Arkansas were beautiful. When I got to Texas I knew the roads by heart. My ride home that day would be over 500 miles and most of the trip was on Hwy 79. The last leg of that journey was tough, riding west into a setting sun and getting home after dark. I was weary, most of my body was hurting, some parts more than others like my butt, my back and my hand that grips the throttle, and it was a great relief when I finally rolled up on my driveway. The whole trip was approximately 3600 miles and I had traveled through 10 states. I have some sense of accomplishment in this. No problems with the bike for one thing and another, it was my longest ever motorcycle trip. Also, my other long trips to Big Bend and New Mexico had been in group rides, not a solo journey. I had been told that when you do solo trips, you meet a lot of people. They just come up to you and want to talk, sometimes out of curiosity and sometimes to share. I found this to be true. People were friendly, more than half the ones I met owned Harleys and I heard some great stories.

P.S. After spending a night in Yankton, South Dakota, I had made my way into Minnesota. I stopped at a convenience store, sometime mid-morning. I was in the MEN’s standing at a urinal when an old guy sidled up next to me. Now when I say old, I mean a good deal older than me. And when I say sidled up next to me, I mean one space over when two was an option.

“I think I may have seen you on the road back in South Dakota,” he said. He was affable and cleanly attired in a style I would call farm fresh. I was finishing up. Zip! Flush!

“Yes, could have been me, I traveled here from Yankton, this morning.”

“Was pretty sure I recognized the bike.“

He was nodding and seemed pleased to confirm the fact. I washed my hands. His broad smile accentuated some missing teeth. I dried my hands and went back in the store where I found a Danish and coffee which I then purchased and went outside. Standing out on the curb near where I parked the bike, I began to enjoy them. The Danish was good. The coffee was not good, but it was warming me and that was good. The old guy soon joined me and began to share a story.

“When I was fourteen, I rode a motorcycle all the way to Yellowstone.”

“Yes, I rode all the way to Yellowstone and I didn’t even have a license. So when I get back, I told the folks at the warehouse about it. That’s where I worked. They said, how did you ride a motorcycle to Yellowstone, you ain’t even got a license, and I said, I don’t know, I just did.“

When he stated he did not know, he shrugged his shoulders, arms out to the side with open hands, in a physical expression of perplexity, “I just did”, his body relaxed, the grin beamed again, his expression a little mischievous perhaps, then a serious look, he continued.

He is laughing now, shaking his head.

“So Mr. Jones gives me this form to sign and I had to pay him, I don’t know, I think it was about four bucks and then guess what?”

He had pantomimed the actions of Mr. Jones handing the form to him, then looked off into space trying to recall how much it cost, then “guess what”, pause, he is looking at me, his eyebrows raised.

“About 2 weeks later, it comes in the mail…” He is laughing really hard now. “And that’s how I got my license!”

His laughter was contagious. I was laughing with him.

“Great story, that is rich. Thanks for sharing it with me.”

He nodded in full agreement. He had no doubt it was a good story, his eyes twinkling, his snaggletooth grin on full display and he stated it once more for emphasis, “That’s how I got my license!”

He then walked off, got in his car, gave me a wave, and drove off happy. I made note of his vehicle.  If I encountered him further down the road, I would give him a lot of leeway. It tickled me though, what began as a somewhat awkward situation, for me at least, with an old guy in the MEN’s, had become a story I wanted to remember.

Having turned 67 now, I am grateful that I am still in good enough shape to get out and do things like this trip. And I am truly grateful that Gabby is my daughter-in-law. Dylan, Gabby, and I have a lot of fun together. I enjoy their good company. They just welcomed a new addition to our family, a puppy named Packer.  How great is that!  I have offered to puppy sit. I am wishing everyone I know good health and happiness in 2022. And maybe some adventure!