Thanks to Ray Benson and Asleep at the Wheel for that line. Of course, in our case it was “…we saw miles and miles of Texas…”, since a fair number of HCBMWR members made the reinstated, resumed, semi-post Covid, “annual” club ride to the Big Bend in the Rio Grande. 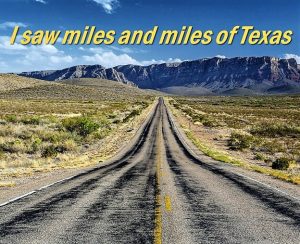 Motorcycling is the original social distancing, the destination counties have very low population density, masks were worn, and more and more members have received their vaccinations, thus those who “came along for the ride” felt like the risk might actually be lower than at home!

Just to get within sight of Big Bend, you cover miles and miles of Texas, whether your favorite route includes I-10 to the max, or you strive to minimize sailing on the interstate, instead of enjoying a mash-up of two-lane blacktop. We had riders, both singly and in groups, who took practically all of the possible routes from Austin to Fort Davis. But, however you cut it, all saw miles and miles of Texas!

One of the first broad glimpses of West Texas can be seen from what used to be called Lancaster Hill, the ragged edge of the Edwards Plateau, along a great (but short) section of old US 290. This road takes off of I-10 about 20 miles west of Ozona and ends at Sheffield. A roadside park overlooks the site of old Fort Lancaster, at the same time offering an expansive view of West Texas’ Delaware Basin: 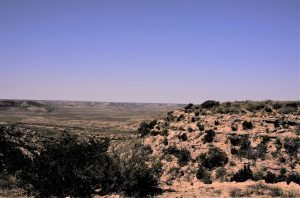 One small group of three rode out to Fort Davis on Wednesday, with the balance of the riders trickling in on Thursday. A Wednesday arrival allowed the three GS riders to explore Big Bend Ranch State Park, where they had to make a critical decision - straight ahead, or turn right and look for bandidos? 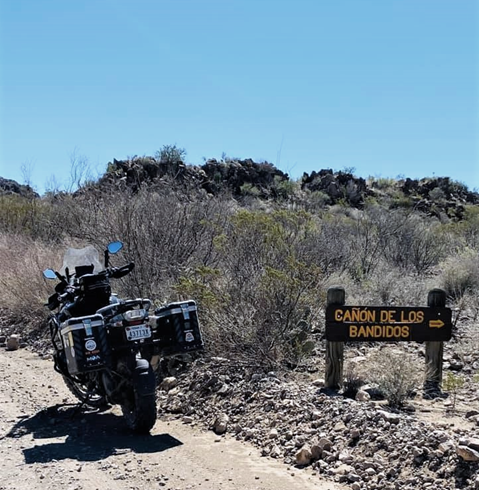 Since all of the club’s attendees had arrived in Fort Davis by Thursday evening, club members broke up into both small and large groups to cover a lot of territory on Friday. The touring riders rode into and around and through Big Bend National Park, Study Butte, Terlingua, Presidio, and environs – they had a lot of miles to cover and asphalt to experience! 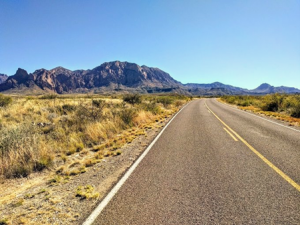 Meanwhile, the “off-road” crowd formed into one of the larger groups (six riders) and went looking for their nirvana – where the “pavement ends”! 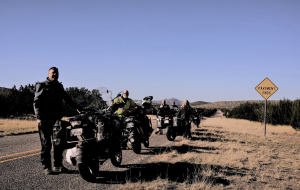 By the time the group finally returned to the motel Friday evening, the question on everyone’s mind was, “how many riders does it take to fix a flat?”. The answer is obviously, “too many”! 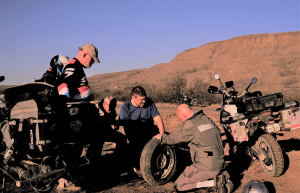 After riding all day, the evenings offered club members the chance to meet for war stories, drinks, and dinner (and maybe the odd bike repair). At dinner time, some opted for the market next door, some the Drugstore, a fair number for the uppity Blue Mesa Bar and Grill (emphasis on “bar”), and at least one or two had dinner right out of their panniers.

Saturday offered another day to explore the region, so riders took off in all directions. While it apparently didn’t suit everyone’s tastes, this group of the “Grateful Eight” opted to ride to the beautiful Cibolo Creek Ranch near Shafter for a catered lunch:

The club’s new officer corps all participated in the weekend’s riding and festivities… some would say planning and leading the effort, while others would say just hanging around. We were happy to have had several new members take their inaugural ride with the club, including Marty Richardson, Winston Cundiff, Ron Pearrow and wife Dorothy, and John Sires and brother Jerry. Rich Tallman brought his son Eli along for the first (but hopefully not last) time. Between members and guests, we had a total of fifteen attendees - not bad for our return to club rides and Big Bend after a two-year hiatus!

Bikes were starting up at zero-dark-thirty Sunday morning, so some riders were obviously eager to get on the road back to Austin. Others were not so eager and pulled out of the parking lot after daylight. Maybe one took a wrong turn (is the Davis Mountains scenic loop, ridden clockwise or counterclockwise?? It apparently makes a difference!), and finally woke up in Arizona.

Until we do it again, Vaya con Dios. Where do you want to ride this fall, and who’s in?